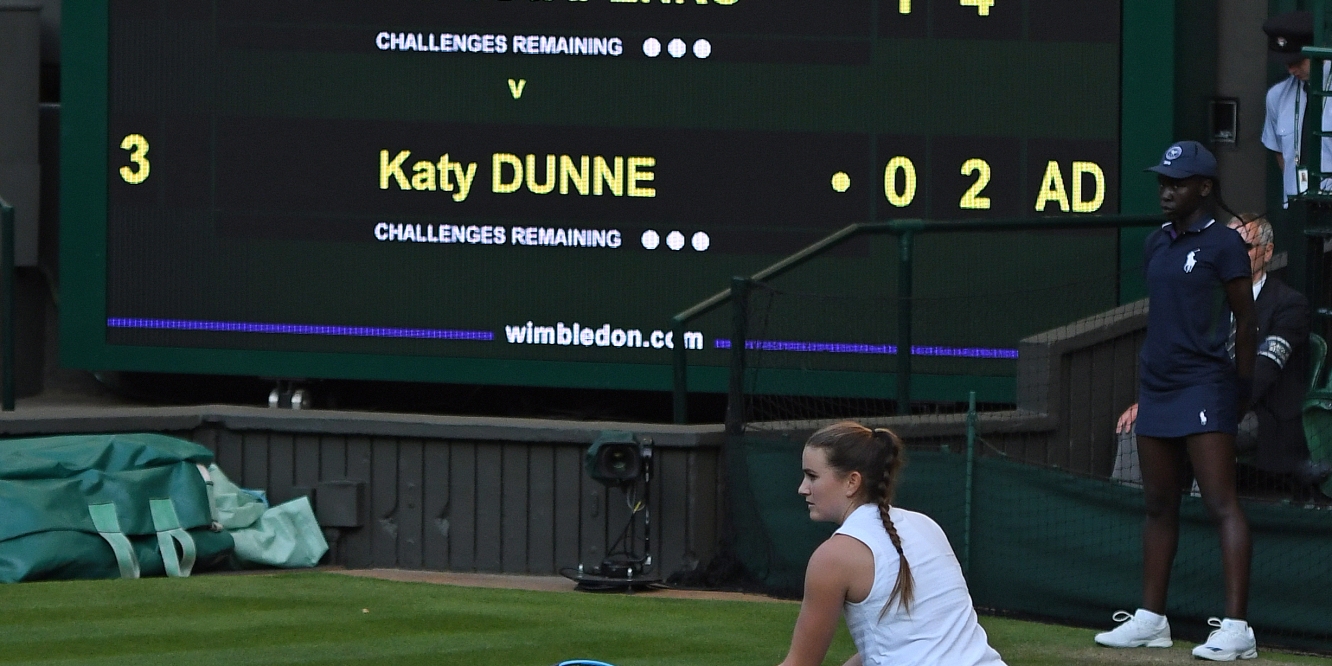 In the second interview in the series, Katy Dunne goes down memory lane and recalls her favourite Wimbledon moments.

Wimbledon is a staple for any British tennis fan, and for Katy, her obsession started when she was just six years old. “I remember in the summer always having Wimbledon on the TV in the background.” she recalls.

You’d expect eyes to be fixated, right? Wrong. For Katy, she always had eyes on her racket, even while Wimbledon was on the television! She says: “My attention span was never good. Five minutes into watching a match, I’d just want to pick up my own racket and play the match against the wall. I won the Championships a fair few times!”

Volleys against the wall have very much become a trend in recent weeks, but it’s clear who the original champ is…

How Wimbledon inspired me

“I was also lucky enough to be taken to Wimbledon with the LTA and my club, too. I got to experience the buzz, the size of it and how incredible it might be to one day play there myself.”

And Katy would get to play there.

Katy Dunne made her singles debut at Wimbledon in 2018, facing former Grand Slam champion Jelena Ostapenko in the opening round. After a late court re-shuffle, the Briton was placed on Centre Court in the late evening, much to the delight of the fans and Katy.

So, what is it like to make your Grand Slam singles debut on one of the most famous courts in the world? “It was crazy. The best moment in my career so far. I loved the experience and really believed I could win the match.” And Katy came so close to causing a huge upset.

After losing to Ostapenko (seeded 12th at the time) 3-6 in the opening set, Dunne fought in the second, saving match point at 5-4 before getting her own set points at 5-6. Ultimately, it wasn’t meant to be for Katy as she lost a close tie break in the second set.

The experience armed Katy with new fans and brought a hunger to get back to Centre Court. “I was gutted to have to walk off court. It’s made me really motivated to make sure I get another opportunity like that!”

No surprises, here. “Easy: Andy Murray. To manage the pressures and heartache from previous years and defeat Djokivic in such a way was truly mind blowing.”

Bring us more shots like this, Andy. Pretty please!

“I’m going to have to say my own moment on Centre Court.” No surprises there, it was an epic!

There is a theme occurring in the My Wimbledon Memories series developing. Shockingly, Olivia Nicholls also selected Andy Murray’s epic 2013 final as one of her favourite Wimbledon moments.

I have to say, this is probably one of my all-time favourite matches ever, too. So much was riding on the match for Serena, who at the time was on track for the Serena Slam. Heather Watson battled back from a set down to serve for the match at 5-4, playing the best tennis in her career.

Katy Dunne was there and recalls it as one of her favourite Wimbledon moments: “I was with Katie Boulter and I can remember exactly where we were sitting. The atmosphere was incredible! We were both gutted for her at the end.”

Yes, unfortunately Heather lost the final set 7-5. The highlights reel is fantastic, and shows just how closely she pushed the GOAT.

Huge thanks to Katy Dunne for participating in this series. You can catch up with Olivia Nicholls’ favorite Wimbledon moments here.