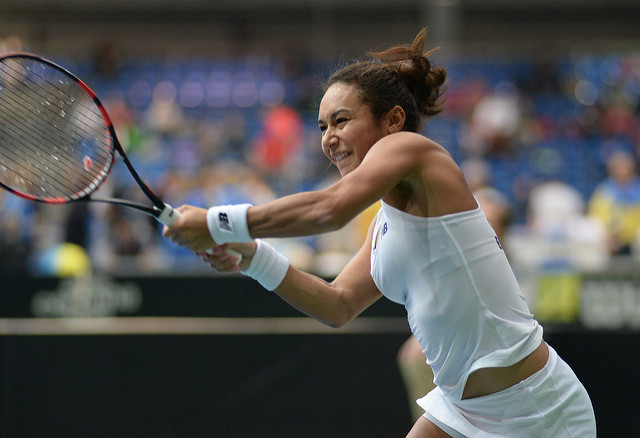 Heather Watson recovered from a set and a break down to reach the final qualifying round of the Rogers Cup in Toronto.

Having experienced incredibly bad luck with her flight, which saw a delay of over 12 hours and not arriving into the city until 8am on match day, Watson understandably started slowly and was broken in her opening service game.

Her opponent, Japan’s world number 294 Hiroko Kuwata, raced into a 3-1 and then 5-3 lead and broke the Brit’s serve for the third time to take the opening set.

Watson, who has struggled on the WTA tour this year, looked down and out when she was broken at 3-1 and again at 4-2. However she rallied, and after successively breaking her opponent’s serve and holding, took the match into a decider.

The final set was one way traffic and Watson grew in confidence. Dropping just two points on serve in the set, Watson broke Kuwata twice before confidently serving it out to love.

Don’t play it down; this was a huge victory for Heather Watson. To have recovered from her travel setback, where she had just one hours’ sleep is huge. Watson could’ve easily let the match get away from her in the second set, but rallied and got her just rewards. In the final qualifying round, Watson will have to be sharp as she faces the very talented Iga Swiatek of Poland. Swiatek has been impressive this year, and came through a tough test against the returning Shelby Rogers 6-4 7-5.