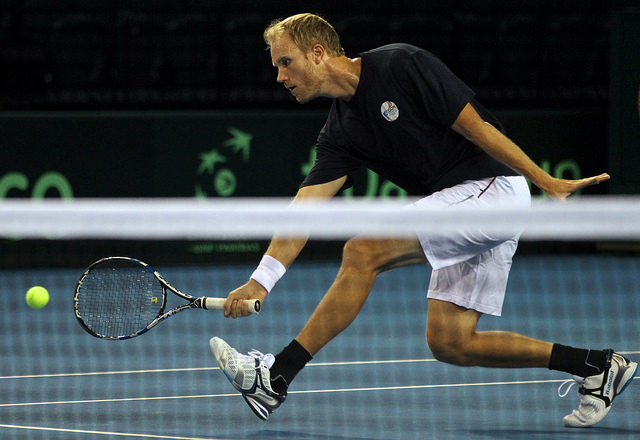 As expected, Jo Konta enters Thursday’s play at the Australian Open as the sole singles Briton left standing. After excellent showings from both Dan Evans and Katie Boulter on Wednesday, it’s down to the British number one to keep our hopes alive for more success in the singles.

And with more doubles matches on the horizon, Thursday is set to be another exciting day for British fans.

Closing play on the Margaret Court Arena, Jo Konta takes on 18th seed Garbine Muguruza in one of the matches of the day. The Brit dug deep to win a tricky opening round match over Ajla Tomljanovic, and many felt that her performance could be the start of seeing Jo climb back up the rankings and push on for a successful 2019 campaign.

We all know how good Garbine Muguruza can be – she’s a two-time Grand Slam champion – but her recent performances on tour have seen her slip outside the top 16 and become a side-note when discussing tournament favourites. However, it would be typical of the Spaniard to have a great run here, with her Wimbledon title coming out of seemingly nowhere.

Muguruza’s opening round win over Saisai Zheng was certainly impressive. A 6-2 6-3 victory was accompanied by four aces as well as a 73% success rate when hitting her first serve.

The head-to-head favours the Brit, having won their last two match-ups, and with both players coming off the back of difficult seasons, the match should be closer than the bookies expect.

11th seeds Ram and Salisbury have been given a kind opening round draw in Melbourne, and will be looking to build on a strong start to the season. After reaching the final of the doubles event in Brisbane (we’ll ignore the defeat in Sydney), confidence should be high for the Anglo-American duo.

Their opponents have little experience together meaning this match is a big opportunity for Joe to continue making a name for himself on the doubles stage. Greater challenges will come, with expected third round opponents of Nicolas Mahut and Pierre-Hugues Herbert, but this should be fairly straight forward.

Fresh from winning the Sydney International title, Jamie Murray and Bruno Soares return to action as they look towards winning a second Australian Open title together. Attention will surely be on Jamie, who will look to put the emotions of Monday night behind him and compose himself on the court.

Their opponents shouldn’t be too much of a challenge either, having lost their last three matches on the ATP tour. With odds as low as 1/9, expect a relatively straight forward win for the Brit.

Cam Norrie partners Taylor Fritz, three days after losing to the American in the singles, as he looks to put the disappointment of an opening round defeat behind him. Fritz is still going strong in the singles, having defeated Gael Monfils, and it’ll be interesting to see how he performs in the doubles or whether his attention will be elsewhere.

Like Norrie, both Mirza Basic and Damir Dzumhur lost their opening round matches in the singles, and the Bosnian duo have lost their last four doubles matches together. The question is: will a pair with a player still in the singles have more or less of a chance of winning?

The bookies think the Brit will squeeze through, but it’s anyone’s guess tomorrow!

The Skupski brothers get their Australian Open campaign underway as they face the Australian wildcards in the opening round. The Brits had an excellent run in Sydney last week, claiming a surprise victory over Nikola Mektic and Alexander Peya, before losing to Murray and Soares in the semi-finals.

Their opponents, whilst wildcards, are going to be dangerous. They, too, reached the semi-finals of an ATP event this month (Brisbane) and so shouldn’t be ignored. However, their record at the Australian Open is poor, and Duckworth has lost all six of his doubles matches in Melbourne.

A tough task, but one the Brits should be strong enough to get through.

Verdict: The Skupskis to win in three sets

The final pair in action in the men’s doubles will be Dom Inglot and Franko Skugor, who are seeded tenth in Melbourne. However they enter the tournament on the back of three-successive defeats, having won just one of their last seven sets of tennis.

Their opponents haven’t played together since 2016 and it is a good draw for Inglot to get off the mark in 2019. Neither Taro Daniel or John Millman are doubles specialist (putting it lightly), and the Brit should be capable of eliminating the pair. Millman will also be recovering from a marathon five-set loss on Wednesday night, so could be running low on energy.

Verdict: Inglot and Skugor to win in two sets

If you thought Harriet Dart’s Australian Open adventure was over, you were mistaken, as she takes to the courts once more in the women’s doubles. And what a way to overcome the double bagel she suffered against Maria Sharapova than a successful run in the doubles.

Dart and Kontaveit have little experience together, but the Brit is perhaps the most accomplished doubles player in the tie, having reached the semi-finals of the mixed event at Wimbledon last year.

Kimberly Birrell is enjoying a fairtyale season, after backing up wins in Brisbane and Sydney over Daria Kasatkina and Kiki Mladenovic respectively, with a stunning run to the third round in the singles this week. Her attention might be focused on a mouthwatering tie against Angelique Kerber on Friday, and having lost all three significant doubles ties with partner Priscilla Hon, it might not be Kimberly’s number one priority.