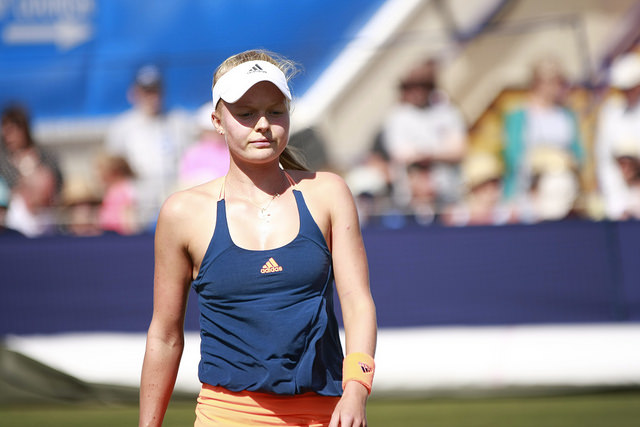 Hopes of a British champion at the Fuzion 100 Surbiton Trophy ended today after Dan Evans and Harriet Dart both suffered defeats.

Dan Evans, who came through three rounds of qualifying, was unable to continue his best run since his return, losing 6-4 7-6 to top seed Jeremy Chardy. Both players served well and it was the Frenchman that took the early lead, breaking Evans at 2-2. And after saving three break points of his own in the following game, Chardy was able to serve out the opening set after 38 minutes.

The second set was much more straightforward as neither player could rustle up a break point opportunity, taking the decider into a tie-break. Chardy showed his quality to race through the breaker and win the match 7-3, making Sunday’s final against either Alex de Minaur or Matthew Ebden.

Defeat for Evans will be tough to take, but he lost to an opponent that knocked Tomas Berdych out of the French Open last week. Calls for main draw wild cards will continue to grow for Evans after another fantastic week and his run in Surbiton means he earns direct entry into the Nottingham Open next week where he’ll face Darian King in the opening round.

Harriet Dart opened play on Centre Court and was unable to take three match points as she fell to Swiss player Conny Perrin 6-3 2-6 7-6 in a match that lasted over two hours. After easing through the opening set, Dart was pressured on her service game as she was broken twice to take it to a decider.

The Brit, who was making her second consecutive appearance in the semi-finals in Surbiton, took the early ascendency and broke Perrin in her opening service game. Dart then confidently played out the set, and took a 40-30 lead at 5-4. However Perrin, who eliminated Gabi Taylor in the quarter-finals, found her range and recovered to level the set.

Dart – ranked 203 in the world – then broke back and served for the match for the second time. Despite having two more opportunities to win the match, Perrin forced a tie-break which she came through 7-5.

Despite the obvious disappointment not to make her first ITF 100k final, Dart can be happy with her achievements in Surbiton. To be able to back-up last year’s run and defend substantial ranking points shows just how far she has come this year. Little was expected from Dart in 2018 following an injury-hit 2017, but she surprised many by winning the Altenkirchen Ladies Open in February. Since then, she has built on her game, securing impressive results in Asia and winning a 60k doubles title in Turkey. Ahead of this week, all eyes were on Heather Watson, Gabi Taylor, Katie Boulter and Katie Swan, but it’s Dart that has performed above expectations once again.

Dart will now travel to Manchester, where she’ll join Naomi Broady at the Fuzion 100 Manchester Trophy and will surely be given a deserved Wimbledon wild card. With nothing to defend for the rest of the grass season, Dart has an incredible opportunity to embed herself inside the top 200 and aim for US Open qualification.