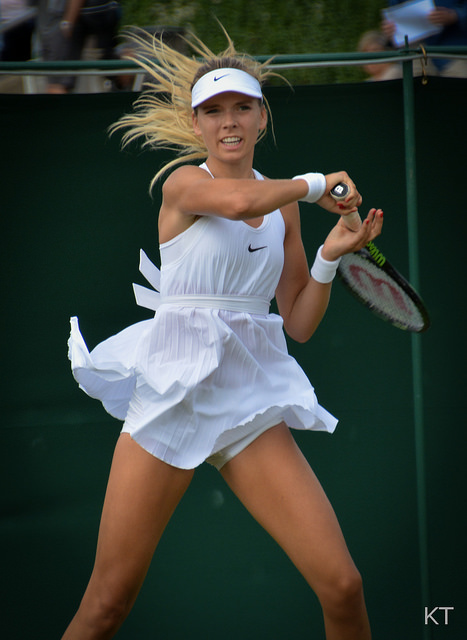 After a week dominated by rain, play for the final was delayed a day and Boulter struggled early on. Falling 3-5 behind in the opening set, Boulter saved set points in a lengthy game to break the Pole’s serve. However, her resolve didn’t last much longer as Radwanska, who defeated Katie Swan in the semi finals, immediately broke back to claim the first set.

Boulter rallied in the second set, and after a lengthy break from the Pole mid-set, the Brit took a commanding 5-2 lead. Unable to take set points and serve it out, Boulter had to settle for claiming the set on the Radwanska serve as she played dominant tennis.

In the final set, Boulter took charge early on, breaking her opponent’s serve and taking a 4-1 lead. But after missing more chances on the former top 30 player’s serve, the pendulum swung and Radwanska was able to break again to bring the score back on serve. However, Boulter soon broke back before confidently serving it out to claim the title in a match that lasted a staggering 3 hours 23 minutes.

The title is Boulter’s biggest to date and guarantees a new career high when the rankings come out next week. She will now travel to Gifu to take part in the Kagaroo Cup International Ladies Open, where she will be joined by fellow Brits Naomi Broady, Gabriella Taylor, Laura Robson, Katy Dunne and Harriet Dart at the $80k ITF tournament.

Doubles success for Nicholls and Grey

The pair went into Monday’s final with a 6-2 2-0 lead, following a dominant display on a rain-effected Sunday. However there were no signs of nerves as the Brits took four of the five games on Monday, ensuring they won the title without dropping a set.

In a remarkable run of form, the victory sees Olivia Nicholls claim her fourth successive title on the ITF doubles tour, following two $15k titles earlier in the year with Alicia Barnett. The duo will pair up again in the fourth Obidos Ladies Open, which starts again tomorrow.

Harriet Dart’s attempts to qualify for the Istanbul Cup ended with a 0-6 0-6 defeat against Valentyna Ivakhnenko.

The Brit was unable to take either of her two break point chances against the 24 year-old Russian and struggled on her serve, winning just 38% of her first service points in Turkey.

Dart, who stunned second qualifying seed Evgeniya Rodina 6-2 6-2 in yesterday’s opening qualifying round, is already guaranteed to rise to a new career high in next week’s rankings after picking up 12 points with yesterday’s victory.

She will also partner Ayla Aksu in the doubles, after the pair received a wild card following their success at the Istanbul Lale Cup ($60k ITF) last week. Britain’s Anna Smith and partner Xenia Knoll are third seeds in Istanbul, with Smith looking to get over Britain’s recent Fed Cup heartbreak.